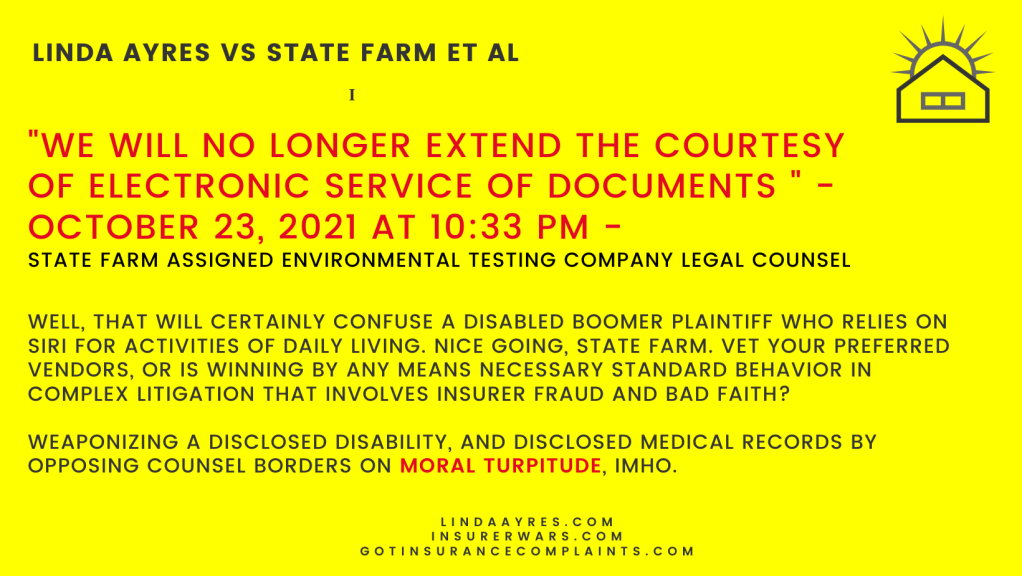 RE OPPOSITION BY LINDA AYRES,
PLAINTIFF, TO AMERICAN
ENVIRONMENTAL GROUPS NOTICE OF
FAILURE TO OPPOSE MOTION TO
COMPEL RESPONSES TO AEG’S
REQUEST FOR PRODUCTION OF
DOCUMENTS, SET SEVEN AND
DECLARATION

The Court may be falsely led, again, to believe that the Plaintiff is mad because an
insurance claim failed, when in fact, the conduct of all defendants caused catastrophic damage to
the Plaintiff’s home and life threatening toxic exposure, knowingly, willfully and criminally.

Defense counsel has failed to name all defendants in the NOTICE OF FAILURE
TO OPPOSE AEG GROUP’S MOTION TO COMPEL and Plaintiff motions for sanctions for discovery abuse, plaintiff intimidation, disability discrimination and willfully vexatious burdens
on the Court, co-defendants and Plaintiff, as a pattern of practice since 2020.

Because of the actions of defendants, compounded by the inappropriate FALSE
MOLD CLEARANCE REPORT provided at the the behest of State Farm, to State Farm, by
American Environmental Group, toxicity and catastrophic losses are the result. To this day, the
house has not had a MOLD CLEARANCE confirming it is safe for habitation.

Plaintiff took refuge for the entire 2020 lockdown, in an uninhabitable property that had no walls, ceilings, insulation, flooring or furniture.

AEG provides litigation support in toxic mold matters, and AEG was unlawfully
assigned by State Farm to produce a Mold Clearance upon which the 65% of the home had
initially been damaged because of the conspiracy and negligence of multiple defendants, and by
2020, the damage was 90%. The report provided to State Farm was not a MOLD
CLEARANCE, but in fact was a “baseline mold report” – insufficient after 40 days of unabated
water intrusion and category 3 water damage throughout the house.

The continued bullying, harassment and intimidation by Booth LLP counsel and
staff is nothing less than moral turpitude and legal chicanery, and deceptions to the Court.

The named defendants are not even correct, in their quest to distract from the
vexatious Ex Parte Hearings scheduled first for September 22, 2022 but had to be rescheduled
because Booth LLP failed to serve Plaintiff at her email address, but rather served to an  addresses Booth has been prohibited and blocked from, further proof of dubious lack of professional conduct.

That hearing was continued to September 27, 2022, wherein Booth LLP
attempted further chicanery and revocation of the Third Amended Complaint in favor of the
Second Amended Complaint, over confusion, of which AEG Counsel contributed clearly state
the due date of the TAC, after lengthy Court discussion; the Notice of Ruling was flawed, all
other Counsel met the TAC extended deadlines. Plaintiff asked the Court to give AEG 48 hours
to produce the TAC, so that Judge Foster could rule with full information on October 18, 2022.

AEG told the Judge that this Plaintiff said they were in default. The Judge ruled that Judge
Foster would sort it all out. On October 10, 2022, AEG served, electronically only, refusing
disability accommodations again with denying mailed copy, with language reminiscent of
October 2021, wherein Booth LLP refused to send any electronic copies, making all discovery
responses harder on the disabled plaintiff. Their service of the TAC is apparently in default, if
they can just make up due dates? Sanctions on Booth LLP and over due, and while supervision
of Officers of the Court is probably not the norm, evidence since 2020 shows continued abuse by
this law firm, and reconsideration of the RICO cause of action may be necessary in light of new
evidence, which will also be orally presented, if given the opportunity, on October 18, 2022…..

Moving counsel has repeatedly stated to elderly, disabled plaintiff it’s intent to
weaponize the discovery process, in what continues to appear to be retaliation for rejection of an
initial 998 settlement offer long ago, and recently aborted settlement discussions that were made
in bad faith by opposing counsel, , in efforts to make continued discovery abuses, oppression and
unduly burdensome demands with intent to obstruct justice, intimidate and possibly bankrupt disabled elderly Plaintiff who had catastrophic damages to her home and health resulting in this
litigation, at the recommendation of the insurance agent and insurance adjusters.

Roy Paynter even said similar things under penalty of perjury in recent cross complaint discovery between defendants…    He seems a little truth challenged, based on these 4 emails?  What else are they hiding? 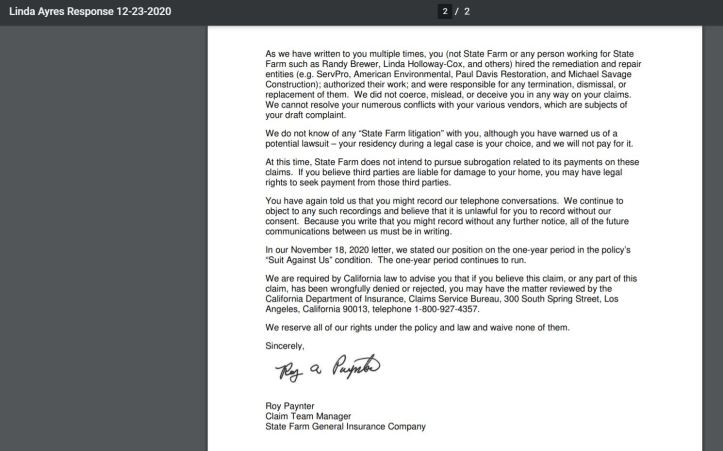 “Evasive State Farm Manager Finally Admits Insurance Company Has a Duty to Help the Insured”, Discovery
Remorseless Abuses against Americans With Disabilities — FOR PROFIT!, State Farm Broke Your House too?, Water Damage, WE ARE THE MEDIA NOW