WHEN IS A PACKOUT A LEGIT SUBSTITUTE FOR A ROOF REPLACEMENT AFTER A WINDSTORM? 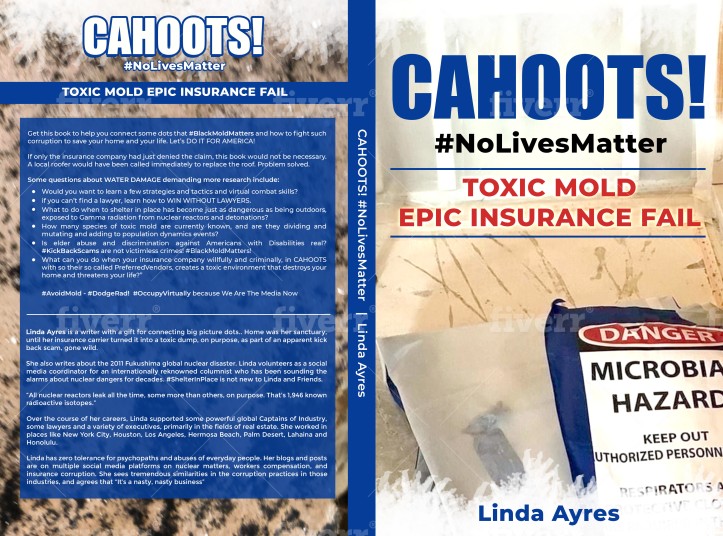 Something is terribly terribly wrong with #insurance in America, isn’t it. www.americanenv.com

Can anybody explain to me why State Farm ® would allow assigned #preferredvendors to destroy my home, & cause it to become 90% contaminated – throughout the house – with life threatening microbial growth?

Why would #StateFarm #AZ #intentionally order and pay for an inadequate report to authorize build back without remediation? They spent $101,000 in 2019, just to cover up the crimes, negligence, intentional misrepresentation etc of their Adjusters and their Preferred Vendors?

HOW CAN AN INSURANCE COMPANY PROFIT BY DESTROYING HOMES AND THREATENING THE VERY LIFE OF THIER POLICY HOLDER, ON PURPOSE.

THE MORE ABUSE I GET FROM DEFENSE COUNSEL, THE MORE I THINK I MADE A MISTAKE IN FILING CIVIL LITIGATION. IT’S BEGINNING TO LOOK LIKE EXTREME CRIMINAL RACKETEERING

Are there any #lawyers in America left that give a hoot about Justice and the American People?

I’m trying to prepare for another lawfare hearing & a series of discovery & other abuses by defense counsel for one of the environmental inspection/reporting companies with their only defense is that their client provided State Farm with the “mold clearance report” that was requested by adjusters in order to authorize build back.

Counsel suggests that if State Farm ® cheaped out & ordered a test that would not properly & adequately assess current mold from 40 days of unabated water intrusion & unremediated #waterdamage, so what. He compared it to a chevy vs a mercedes or something like that

The thing is, THAT IS NOT HOW SCIENCE WORKS.

Counsel says both of his client’s reports are just a snapshot of readings for that day.

And so what if reports before & after illustrate and evidence increasing microbial growth, identified medically as life threatening  at 10 months.

Nevermind that their reports say ‘if there is visible evidence of mold, call us back, pdq’ – For the second report, they recommended $10,000 in surface cleaning and forgitabout sources of mold contamination for a while longer.

I HAVE TO FIGHT IN COURT WHEN EVERYBODY KNOWS THAT STATE FARM AND OTHERS DO THIS TO AMERICANS ALL THE TIME? WHY DOES #CDOI SUPPORT SUCH CONDUCT? WHY DO AMERICANS ACCEPT SUCH CORRUPTION??  ?????

ASKING FOR SOME AMERICANS.

#ALERT!! #aeg website says they “WORK WITH ALL INSURANCE COMPANIES”

“No one wants to file an insurance claim. It means something has happened to damage your precious home, which is something no homeowner wants to go through. But with the right, trusted contractor, restoring your home after a damaging event like a storm, fire, flood or fallen tree can be an opportunity to refresh its look and find a silver lining in what seems at first like a dark cloud. With Contractor Connection, you can be assured that the insurance restoration contractor you  [ASSIGNED TO YOU] choose will be among the best in your area, and will be fully equipped and prepared to make your home as good as new in a timely manner.”

When is a packout a substitute for a roof replacement? How can a sales rep for a general contractor work as an adjuster – without a license?

“Paul Davis has a team of wind and storm damage cleanup technicians who are skilled in assessment, repairs, and cleanup following a storm-related incident. They follow a step-by-step process to take any home from its damaged state to the way it appeared before the incident. We are prepared for any challenge, from minor wind damage to massive storm damage.”

“We stop the damage with industry-leading tools and experience.”

THEY 10X’D THE DAMAGES, ON PURPOSE!  It could have been very profitable for them; now it’s a $10 million lawsuit. Go figure that math!

“Having a plan of action when a mold problem arises can make all the difference when it comes to minimizing damage and the effects on your family’s health.”

“When mold starts to invade your home, dealing with the problem quickly and safely should be a priority. It can take less than 72 hours for mold to spread throughout your home, which may result in negative health effects to your family, as well as damage to your property.”

This is what they say, but not what they do: https://www.americanenv.com/environmental-consulting-services/mold/

Is the INITIAL MOLD ASSESSMENT the “chevy” and the
POST REMEDIATION MOLD INSPECTION is the ‘mercedes’?

by their own admissions, AEG says:

“Toxic mold is a serious threat to all types of building owners and managers. Mold can grow in a wide range of different locations under varying conditions, and detecting it can often be difficult until it’s too late. If left unaddressed for too long, a major infestation can take root, which usually requires a serious remediation effort to clear. In some cases, toxic mold can put dangerous levels of harmful, undetectable spores into the air, leading to all kinds of major health problems.”

Something is terribly terribly wrong with #insurance in America, isn’t it. www.americanenv.com

#Cahoots!  We don’t talk anymore— he told me the claim would never leave his desk till I filed a lawsuit.  Done ✅

MAKE IT A GREAT WEEK 🦅

#WoW! THEY ARE NO LONGER THE 4th WORST INSURANCE COMPANY IN AMERICA!

IMHO – #StateFarm is THE WORST OF THE WORST INSURANCE COMPANIES… IN THE WORLD!! 🌎🌍🌏

Do your own research- draw your own conclusions! Read this, too!

When one false negligent and or fraudulent #environmental report leads to further dangers to occupants & workers…. #WhoYaGonnaCall?

My State Farm ® agent, #BobDunn, RIP, couldn’t be bothered to help me as I reported regularly to his office that, “OMG, the Arizona #ClaimsOffice sent goons out to destroy my home. Look what they have done! [showing pictures from my iphone, tearfully]

The office manager even called the adjuster on my behalf since I was get to no responses. She finally made an appointment for me to meet with Bob. Bob was a real jerk. He said he was too busy to help me, busy writing ‘#FirePolicies for Californian’s who had been cancelled by other carriers. He told me to #LawyerUp and sue for a million dollars. I said, “I can’t find a lawyer and I don’t need a million dolllars. Nobody will represent me!” He said, ‘You’re right Linda. That’s how lawyers are. Sue for $10 million, tell the lawyers you only need a million and they can have $9 million”….

I told him how Paul Davis Restoration caused the roof replacement to be delayed, demanded cash if I wanted it fast, then organized a fast dirty pack-out 10 days later, destroying all my household goods. More to that story. I told Bob, “they are the “Adjuster Representative” and Bob snarled at me and said, ‘I DON’T KNOW WHAT THAT IS. WHAT IS AN ADJUSTER REPRESENTATIVE” I said, “I don’t know, that’s what his reports say at the top. The State Farm adjuster hasn’t shown up… PDR is the general contractor assigned by Contractor Connection and SERVPRO put the tarp on and is supposed to be doing the water damage remediation.’

#PDR told me if I wanted a #moldclearance, to tell #ServPro. #ServPro apparently abandoned the project, per State Farm, on 2/19/2019 – claiming it was complete (but there was still no roof, still storms, and #TheTarp never worked) ServPro asked adjuster if they should get a mold clearance. #StateFarm got one from @AmericanEnviornmentalGroup – and all subsequent reports suggest that both the AEG March 2019 and August 2019 were FALSE. But, they gave State Farm what they asked and paid for — a mold clearance upon which the cover up build back was authorized.

Certain members of defense counsel threaten me often… they also say that telling the truth publicly is somehow defamatory. TRUTH IS THE DEFENSE FOR THAT.

I left Bob’s office in tears, and you’re read the story of what has happened since 2/2019. Shortly thereafter a friend called and read me Bob obituary. I guess he had been sick… still no excuse for his callous disregard for a #StateFarm policyholder of many decades.

#Alert for #PublicAdjusters! #WeAreTheMediaNow — Step up your commUNITY awareness game!

Too many people don’t have a clue of your role in surviving an insured loss…. and if they do know, they don’t know how to reach you locally, and what to ask about before a loss, and how to get help upon loss or as loss escalated. Time permitting, I might check this out, too.

THE MEDIA SHALL SET US FREE!
Remember remember.. #WeAreTheMediaNow
SO BE IT!

#AskingForAFriend — if defense counsel threatens and intimidates potential witnesses and other #FriendsOfPlaintiff… IS THAT ACCEPTABLE CONDUCT?

What if those friends/acquaintances cease communications with Plaintiff as a result?

Just a consequence or does that tie into an allegation of racketeering or just #GuerrillaLawfare and plain everyday #lawfare?

It’s my experience that StateFarm moved up a couple notches from studies reporting that they are the #Worst Carrier in America.. (used to be 4th worst, according to studies last year)

Do attorneys get paid enough to follow my every keystroke on a variety of social media platforms?
Great work, if you can get it, huh? $300/hour to monitor little ol’ me. #CmonMan — See you in Court Thursday….

https://www.linkedin.com/posts/lindaayres31111_askingforafriend-friendsofplaintiff-guerrillalawfare-activity-6891157239529385984-xO6W
Chad Harrison – Do you know
if Mold Law Group might consider reviewing my #ToxicExposure medical records and #environmental reports of the catastrophic damage caused by insurance carrier and their assigned preferred vendors? On a contingency basis? Who can I talk to there? My case is yuge and escalating!! AYRES VS STATE FARM ET AL 💨☔️💨Do you know if they ever found any #Plaintiff #Lawyers in #California? 🤔I gotta find #legal representation— the escalating #GuerrillaLawfare is unconscionable! It’s a little hard to fight as a #DisabledBoomer 🦅Disabled Boomer takes on #JakeFromStateFarm et al
👠👠Anybody know anybody in California with a legal team interested in #Mold #Mycotoxins #WindPeril #BadFaith #Conspiracy #Roof #WaterDamage #ElderAbuse #NuclearVerdicts & #ClassAction?
https://www.linkedin.com/posts/lindaayres31111_medical-litigation-medicine-activity-6891090948714045440-HQzT
WE ARE THE MEDIA NOW & JUSTICE ADVOCATE1mo • 1 month ago

Leave a Reply to Linda Ayres and Friends Cancel reply